The Message of His Beatitude Daniel, Patriarch of the Orthodox Romanian Church, at the feast of Holy Pious Demetrios the New, Protector of Bucharest, Monday, 27 October 2014:

Holy Pious Demetrios the New of Basarabi (or Basarabov, a village on the Southern bank of the Danube, close to the city of Ruse of today’s Bulgaria) was Vlach (Romanian) of origin and lived in the 13th century, during the Kingdom of Tarnovo (1185-1396) which was founded by Romanians and Bulgarians, under the rule of the good brothers Peter and Ivan Asen, who were Romanians of origin.

St Demetrios the New was first a shepherd; he shepherded the sheep or cattle of the villagers on the plain and he was praying, offering to the poor a part of what he was receiving from the villagers whose animals he was shepherding. He was very sensitive and merciful in his soul; it is said that many years he repented and cried because by mistake he stamped over a chickling which he crushed to death.

Later on, the pious and merciful shepherd became monk in a monastery, and afterwards he lived as a hermit in a cave, next to Lom River, fasting and praying. We also know about him that when he felt his approaching death, he lay between to stones, symbolizing the coffin, and afterwards he gave his soul in God’s hands, being in solitude, with no one nearby at his death, but a multitude of invisible angels. Later on, his incorruptible body was discovered in a wondrous way and it begun to be venerated in Basarabov village and in that area. Tradition says that one of the Basarab Ruler Princes of Wallachia erected a church in Basarabov village honouring Holy Pious Demetrios. His relics were brought in Bucharest in 1774 and remained in this metropolitan and afterwards patriarchal cathedral until today.

The presence of the relics of Holy Pious Demetrios the New on the Hill of Joy in Bucharest tells to the world of today about the grace and blessing that God gives through His saints to those who faithfully pray to Him.

The procession with the reliquary of his holy relics and the wondrous works performed upon those who prayed to St Demetrios the New, asking for his help in time of trial and suffering, calls us to a spiritual journey towards the Kingdom of Heaven, for this represents the main aim of our earthly existence, as our Saviour Jesus Christ Himself teaches us when He says: “But seek first the kingdom of God” (Matthew 6:33).

The religious pilgrimage is a pursuit in this world of what is not of this world, since: “The kingdom of God is not of this world” (John 18:36). The only time when the human being was not a pilgrim was that in the Paradise, namely in communion with God whom he was not forced to look for, since he was living in His presence and in harmony with Him.

At the very moment when our forefathers Adam and Eve sinned through disobedience to God, they have estranged themselves from God and lost paradise. The longing after the joy of human’s communion with God, which existed in the lost paradise, transformed the human beings in pilgrims on earth, in search of happiness and everlasting life in the Kingdom of God.

Therefore, religious pilgrimage is a constant feature of humanity who experiences the faith in God as a foretaste from this life of the heavenly joy in the Kingdom of God.

In this regard, St Paul the Apostle says: “The things which are seen are temporary, but the things which are not seen are eternal” (2 Corinthians 4:18). Because God is unchanged and limitless, He cannot be seen with the bodily or physical limited eyes. However the soul enlightened by faith can spiritually see or sense God’s presence beyond physical, material sight.

This truth is confessed by the Holy Apostles. In this sense, St Paul the Apostle says: “Faith is the substance of things hoped for, the evidence of things not seen” (Hebrews 11:1). Therefore faith is a foretaste of some heavenly holy gifts and a spiritual sight of some holy works of God unseen by the bodily eyes. This faith becomes through prayer a spiritual sight of God, present and at work through His grace in peoples’ life. Therefore, St Peter the Apostle tells to Christians: “Jesus Christ you love, not having seen Him. Though now you do not see Him, yet believing, you rejoice with joy inexpressible and full of glory” (1 Peter 1:8).

Christians love Christ and believe in Him even if they don’t see Him, while their faith brings an inexpressible joy, full of glory, which is a joy beyond any expression and beauty. Christians’ inexpressible joy, full of glory, is the joy of salvation, namely the bounty of eternal life. Thus, St Peter the Apostle immediately adds: “Receiving the end of your faith—the salvation of your souls” (1 Peter 1:9). In other words: the recompense, reward or the fruit of the living faith is the salvation of the soul that is human’s union with God. Although we do not see Christ with our bodily eyes yet, through faith we sense His presence in the world and in our life. Consequently, when the relationship of the human being with Christ the Lord is intensifying through faith, prayer and good deeds, the presence of Christ in one’s life brings about a lot of inexpressible joy, full of glory. Therefore, St Maximus the Confessor († 662), was speaking in the 7th century about the virtue of faith as being the spiritual relational power, which accomplishes the perfect, direct and beyond understanding unity of the faithful with God.

Faith is a gift of God for humans, which has to be cultivated. In the beginning, faith comes forth from listening to the word of the Gospel, and afterwards it is confirmed and enlightened through the joy of the presence and work of God’s grace in the soul of the one who believes in Him. Thus, enlightened by grace, the Christian can say: “I believe, Oh Lord, and I confess”.

Having in our souls the working faith through love, when we come to church we encounter God and His saints, venerating the holy icons and the relics of the saints, we communicate with God through prayer and by listening to His Gospel and afterwards we partake of the crucified and the risen Christ the Lord, by receiving His Body and Blood in the Holy Eucharist, as a foretaste of His eternal life and love in the Kingdom of Heaven.

The faith of the saints, who have united themselves with God and are together with Him in the Kingdom of Heaven, enlighten our faith, helping us to spiritually see God and His saints with the eyes of the soul, or the eyes of the faith.

Having in our soul the light of the faith, the multitude of believers come to the feasts of the saints of God and venerate their holy relics receiving from them blessing, joy and great help in their life and activity.

Today we live in a world marked by confusion and uncertainty, of much violence and pain, especially in the war zones. We see in our days many signs of physical and spiritual suffering caused by sickness and poverty, injustice and greed of money and power, but less deeds of merciful love and mutual help among people.

Thus, in an unstable and egoistic world, pilgrims look for the Holy and Merciful God, the One Who is steadfast in love, in order to receive from Him healing and help, which are more certain than any human help, while the joy of human’s encounter with God and with His saints transforms suffering in hope, labour in joy and fight in victory.

Therefore, let us use this time of pilgrimage for our encounter in faith, hope and love, for multiplying our good deeds.

In these days of pilgrimage in Bucharest, together with the relics of St Demetrios the New and of St Ruler Prince Martyr Constantin Brâncoveanu, we venerate with great piety and joy the Venerated Wood of the Holy Cross, brought from Jerusalem, by His Beatitude Theophilos III, Patriarch of Jerusalem, from the holy place where our Lord Jesus Christ was crucified on the Cross and has risen from the dead.

Christ’s Cross is for us Christians the power of the saving love of God (cf. 1 Corinthians 1:18); it bears in humans’ souls the sacrificial love of the good parents for their children, of the spiritual fathers for those pastorally cared for by them, the love of the industrious and generous humans for their fellows in need, the sacrificial love of those who work and permanently struggle for the wellbeing of the family and society, of the people and of their motherland, of all people for whom Christ the Lord had died and was risen in order to give salvation and eternal life to everybody.

We congratulate all of you, beloved faithful pilgrims, for your piety and diligence, and we pray the Most Merciful God to repay your patience and spiritual zeal with His rich and unperishable gifts, with good health and salvation, with peace and joy, with help in your family and activity, with many and blessed years, in order to grow in faith and fraternal love, in holiness and good deeds, for the glory of the Most Holy Trinity, the joy of the saints and in attaining salvation!

Patriarch of the Romanian Orthodox Church 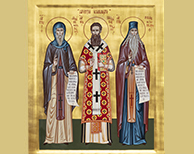