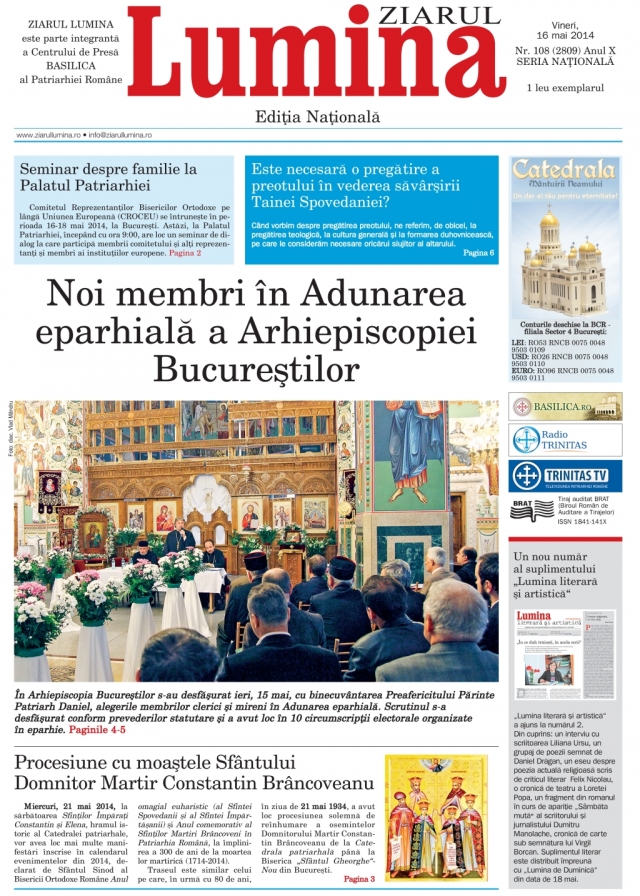 Launched in Iasi by the Metropolitanate of Moldavia and Bukovina, on February 7, 2005, the first Christian daily in Romania and, until now, the only Orthodox Christian daily in the world, Ziarul Lumina (The Light) has benefited, in Bucharest, from an editorial and typographic ascension, at the same time with an extension of its distribution area. Since October 16, 2005, the Lumina de Duminică (Sunday Light) „weekend” edition of the newspaper is being published. The Christian spirituality and opinion weekly is aimed at readers who, on Sundays, are preoccupied with subjects of Christian spirituality, different than those sought during weekdays.

In a transition society and in a media space dominated by sensationalism and aggressive information, The Light sought to bring more tranquility, trust and respect, to be an honest and equilibrated newspaper. To bring in the foreground the traditional moral and spiritual values, to cultivate hope and to bring people closer to the life of the Church.

During November 2007, the Bucharest editorial office was set up, in the spaces offered by the Printing Press of the Orthodox Biblical and Missionary Institute. The Editorial team grew over the following years, both trough the relocation of some of the employees in Iasi as well as by the recruitment of experienced journalists and young enthusiasts, willing to embark on the Church’s ministry through printed media.

After the Bucharest editorial office was fully organized and close relationships were developed with the diocesan centers across Romania, the idea of a national edition of the newspaper has taken shape, which would be synthetic and representative, while several regional editions would give ampler space to facts and events taking place in various geographical areas.

The consolidation and expansion of the editorial team have yielded a better reflection of church life from all areas of Romania and the use of ampler spaces for religious news.  Thus, a better framework was created for events, cultural-educational and social-philanthropic programs organized by church units, while allowing a better mediatization of major themes in church life. The LUMINA Publications have reflected, through interviews, reports, news and documentaries the spiritual-academic contents and the pastoral effects of the main themes set by the anniversary years 2007-2013: Saint John Chrysostom, the Holy Scripture and the Holy Liturgy, Saint Basil the Great and the Cappadocian Saints, the Orthodox Creed and the Autocephaly of the Romanian Orthodox Church, the Holy Sacrament of the Baptism and the Holy Sacrament of Marriage, the Holy Unction and the care for the sick, Holy Emperors Constantine and Helen. Together with the exertion of formative mission in the spirit of Christian values, The Light assumed both „the role of the Church’s communicator in society, as well as that of nurturer of inter-diocesan communion and brotherly cooperation within the Romanian Patriarchate” (HB Patriarch Daniel).

Since January 1, 2008, the two LUMINA publications were joined by Vestitorul Ortodoxiei (The Orthodoxy Herald), a church news magazine, printed in a new full-color format, with many photos and a rich content yielded by the cooperation with other media channels within the BASILICA Press Center.

The editorial strategy as of late was guided by the following coordinates:

Interviews and documentaries were published in The Light and in the weekly Sunday Light (1-2 pages), in special sections and pages dedicated to the family. These included thoughts of the Holy Fathers about the spiritual significances, tradition and history of the Holy Mysteries of the Baptism and Marriage, as well as the contemporary problems facing Christian families. In the LUMINA publications’ pages, the Christian family was presented as a school of love and giving, as an environment of ascesis, of human fulfillment and perfecting. In the pages titled „Youths and the Church” published in the Sunday Light, a series of articles on the importance of the Baptism and Marriage in the life of the person, of the family and of the Church’s community were included.

The staff of the LUMINA Publication includes 40 permanent employees (29 in Bucharest and 11 in the regional offices), as well as over 20 permanent collaborators. Since October 2011, the main headquarters is located in the Romanian Patriarchate’s building at 1 Regina Maria Boulevard in Bucharest.

The LUMINA Publications’ main projection in the virtual space, ziarullumina.ro, is a constant preoccupation for the editorial team and the newspaper’s leadership. The content is refreshed daily, with periodic restructuring, according to the functional needs and the new IT technologies developed.

Between 2010-2012, new versions of the ziarullumina.ro website were launched, and the website long surpassed the status of an online newspaper. The new ziarullumina.ro website is a news portal with real-time content, a platform which can be extended, in time, to accommodate endless possibilities, in order to consolidate its status of a virtual library providing Christian teachings, as well as its status of a database with contemporary church and social events. The archive, which can be searched according to various criteria, reached more than 50,000 items. An offline archive was produced in 2010 and distributed on DVDs to loyal readers. Since the mid-2012, the vestitorulortodoxiei.ro website is also online.

Printing and Distributing the LUMINA Publications

The Light and The Sunday Light were printed, in 2007, at the rotary press of the ALBINA Printing Press in Iasi, then, for some time, at various printing presses in Bucharest. After the Romanian Patriarchate’s PHAROS Printing Press set up its own rotary press, since June 1, 2011, it started printing the weekly Sunday Light, the National Edition of The Light, as well as its Oltenia Edition. In order to distribute the newspaper more efficiently, the Moldavia Edition is printed in Iasi, the Transylvania Edition in Cluj-Napoca and the Banat Edition in Timisoara.

According to article 198 of the Bylaw for the Organization and Functioning of the Romanian Orthodox Church, the church units are required to subscribe to central church publications (including the LUMINA Publications). That is why the base circulation is made up by subscriptions from church units, but there are also individual subscriptions contracted through the Romanian Post Office.

Currently, the LUMINA Publications are distributed, through subscriptions, in all the counties in Romania. Most subscriptions come from the dioceses comprising the Metropolitanate of Wallachia and Dobrudja (more than 60%).

The total number of subscriptions contracted through dioceses and the Romanian Post Office is around 23,000.

On February 7, 2012, on the seventh anniversary since the first number of The Light was printed, the Romanian Orthodoxy Photo Archive was launched in the presence of His Beatitude Patriarch Daniel, a project which seeks to collect, identify and archive a large number of photos concerning the history of the Romanian Orthodox Church in the 20th century.

Some of these photos were published in the more than 650 articles written by historian Adrian Nicolae Petcu in the “Memory of the Church” section, which is included in the daily since October 2010. This photo database, named the Romanian Orthodoxy Photo Archive, is accessible online at fototecaortodoxiei.ziarullumina.ro, and includes, currently, more than 2,000 photos, mostly from the first half of the 20th century, which are depicting clerics, professors, monastics, worship and monastic places, some disappeared or restored, various important moments and events in Romanian church life, both in the country and abroad. The material is sourced from the National Central Historic Archives (ANIC), the special Photo Archive fund, but also from the archive of the National Council for the Study of Securitate’s Archives (CNSAS), private collections and various historic works.

With the blessing of His Beatitude Patriarch Daniel, the diocesan centers across the Romanian Patriarchate were asked to contribute to this photo database with images in their own archives.

The “Light of Consciousness” pages in the Sunday Light weekly are developed together with the producers of shows on the dialog between religion, philosophy and science from TRINITAS TV, in a project unfolded by the Al. I. Cuza University in Iasi and the Bucharest University, in collaboration with the Romanian Patriarchate.

The “Ziarul Lumina News” is an editorial project developed with TRINITAS TV.

Through collaboration with the Pilgrimages Department of the Romanian Patriarchate, the bimonthly supplement The Pilgrim’s Light is printed, distributed nationwide with The Sunday Light.

In 2012, the TRINITAS Publishing House of the Romanian Patriarchate launched the MEDIA CHRISTIANA collection, comprised of three series: LUMINA, TRINITAS Radio and TRINITAS TV. The LUMINA series opens with the volume “Dialoguri ortodoxe la început de mileniu – 30 de interviuri cu ierarhi ortodocşi” (“Orthodox Dialogs at the Turn of the Millennium – 30 Interviews with Orthodox Bishops”), previously published in The Light between 2005-2012. The series was continued with other 4 volumes.